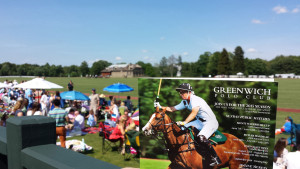 Sunday, June 7th was the opening day for Greenwich Polo and what a perfect day it was! Gates opened at 1PM giving plenty of time to scope out the territory. If you didn’t bring your own picnic, there were food trucks from Lobstercraft, Bounty Gourmet Burgers, Follow that Cupcake, La Fenice Gelato, Sal’s Italian Food Truck, and Skinny Pines Pizza. There were also “refreshments” to be had courtesy of J House if you neglected to bring your own bubbly.

Before the official match, there was tension in the air as a horsepower “showdown” took place between a Tesla car and one of the Polo ponies. Honestly, I’m sure it was all tongue-in-cheek, but I was curious to see if the poor horse would be spooked, running neck and neck with a vehicle or if the well-tended field would be ripped up by spinning tires. Thank goodness for the electric motor since this was no NASCAR event with roaring engines! I suspect the rider was also saving his horse for the real deal later on. This was, however, a fun way to showcase a sponsor.

As highfalutin (yes, it’s one word; I had to look it up) as this all sounds, it’s a really fun way to spend a Summer Sunday afternoon. Bring a blanket and/or chairs, a cooler, and even Fido as the horsey set loves their dogs too. Come early, as there is opportunity to see the horses fairly up close and personal prior to the match. They are beautiful animals and watching the skill and grace of the riders is a sight to behold. The game is fast with six 7 minute periods where the two teams traverse a field, the equivalent of 9 football fields, in their quest to score goals. The announcer, entertaining on his own, gives a play by play any first-timer can easily follow.

How to Make the Most of Greenwich Polo

There is an etiquette to follow that may feel intimidating at first but what new experience isn’t? People watching is fascinating with some in dresses and heels (yes, that was me because I can’t wear those fun shoes doing open houses), some in breeches but, mostly, casual elegant – and hats, of course! There are children joyfully running about to complete the festive atmosphere. Check out their calendar if you’d like to do your own divot stomping!